I was punished by God

I am 100% convinced that my fall down the stairs on Easter Sunday was no accident.  Here's the timeline of events:

February 16th, AKA fat tuesday I decide (against my better judgement) to give up sweets and alcohol for lent.  The sweets I can handle, booze? Yeah, not so much.

March 28th, AKA black sunday I didn't eat ANY sweets or drink ANY alcohol because I "cheated" on the day before and was making up for it by being good.  (if you are unaware, Lent is 40 days and doesn't include Sundays so you don't have to give up your stuff on Sundays.  Don't believe me?  Count the days and visit http://www.catholicismforweaklings.com/)  Okay, just kidding about the website, but it is true.

April 2, AKA the night before easter Sunday, and my sister in law and I had a glass of wine.  Yes I know lent wasn't over, but it was midnight somewhere in the world and I didn't really think God would mind, especially since He knew I would be in mass on Sunday morning.

April 3, AKA easter morning, from Friday night until Sunday morning before mass I made multiple trips up and down my sister in laws gorgeous and seemingly fresh polished hardwood stairs.  No problem.  The FIRST trip down the stairs AFTER mass, and I repeat IMMEDIATELY AFTER easter mass I slipped on the stairs and fell on my ass.

Turn on your damn ears

I know that I've blogged about this before, but O.M.F.G. (you KNOW what the F is for) I cannot for the life of me accept my children's lack of listening skills.  As you  are painfully aware there's a difference between HEARING and LISTENING.  According to children, these are THEIR definitions:

HEARING:  Mom/Dad, I hear you when you are talking.  No matter what you say I will decide if I will actually acknowledge you.  So for things like "brush your teeth" or "put on your shoes" I will determine, at my earliest convenience, when I will actually LISTEN and do what you ask.

LISTENING:  Mom/Dad, I will listen to you only when I Goddamn feel like it and only when you say things of interest to me, such as "Who wants ice cream" or "Who wants a puppy?"  If you insist on saying things like "put your clothes on" "get in the car" and "stop smakcing your brother" note that I will HEAR you, but I will not do as you command.  I do have the ability to transition from HEARING to LISTENING, but I caution you that just adding words like "or I'll spank your butt" or "you will not get a cookie" makes little difference to me.  I do, however, have the ability to measure the octave of your voice and can tell how close you are to actually enforcing said punishments like spankings and it is at that critical juncture when I will turn my ears on and LISTEN.  And not one freaking minute sooner.
Posted by Maude at 9.4.10 No comments:

Why I love living in north Idaho 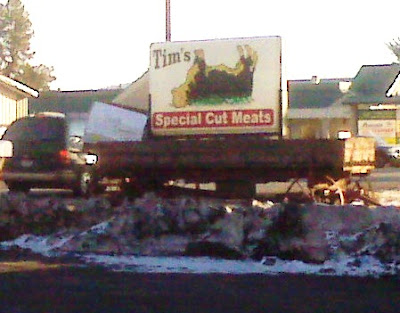 You know the saying, a picture speaks a thousand words? This one doesn't have to. It says it all in less than 10: We love meat so suck it vegetarians!

Things that are not fair

I think that just about covers it.

My post yesterday was an April Fools Joke!!! YEAH BABY! But, um, apparently I shouldn't make those kind of jokes because it can happen. Here's one EVEN SCARIER than someone who had a vasectomy:

From a friend who I will not name to protect their identity:

"Well I had to laugh at your April Fools Joke, too bad it actually happened to us. Yep, I am preggo with number 4 yes 4 and it is finally a girl. I had my tubes tied in November and we were preggo before. I didn't figure it out until I was about 20 weeks along. Crazy huh so my little ones will be 13 months apart! Yep I am freaking out."

Freaking out? That's the understatement of the year! OMG, this is a full time WORKING momma with three boys already. God Bless her, keep her in your prayers.

Remember waaaaaay last fall when Mark had an appointment with Dr. Peterson (Peter! I still laugh about it) to have his little swimmers road-blocked? I wasn't overly sympathetic to his, er, needs and I kept hoping hoping hoping that maybe just maybe it might fail.

Weeeeeeelllllll, despite having been given the "all clear" in January, apparently something went awry because GUESS WHAT? Come mid-September we'll have another little Little to enjoy. Yep, that's right! I think perhaps there were some little swimmers who just made it past the dam or something.

Mark is still slightly suspicious but I think he's coming to terms with it, though he will totally deny it until it's literally staring him in the face! I think it's a defense mechanism or something, after all denial ain't just a river.

But now I know why I have been getting sick NONSTOP this year. I knew this, but forgot, that you tend to lose some of your immune system abilities when you get knocked up. So no more nyquil for me, and I suppose its a damn good thing I gave up booze for lent! Otherwise we'd be having a two headed baby.

Apparently there's only one little Little in that already chubby belly of mine, which was of GREAT relief because I really don't think I could handle twins with the three children I already have.

We haven't told anyone so this is the BIG announcement. I am excited, Mark is in denial and we haven't told the kids yet, even though they ask me daily if my fat belly has a baby in it and when its going to arrive.

I am just ever so greatful that I haven't barfed during this whole thing. Living with that hangover feeling for several months is just the pits. We do have names picked out: Anita Little if its a girl, Stuart Little if its a boy.
Posted by Maude at 1.4.10 5 comments:

Maude
I am a wife, mother of two teenagers and a full time nonprofit leader. In my spare time I.....wait, remind me again what spare time is?

Bliss & Chaos - the only way I know to describe life as a working mother.

Bliss comes from the mom part, chaos is what ensues Monday - Friday between 6:30 and 7:30am and 7 and 8pm. Occasional bouts of chaos can also occur on weekends, particularly if we are A) going to Oaks Park, B) hosting a BBQue with friends or C) attempting to attend Mass.

Please enjoy and pass along this blog, whether you are a working mom, a stay at home mom (I know you know what chaos is sista!) or anyone who finds humor in raising two teenagers while attempting to be successful at a job/being a spouse/not losing their freaking mind. Enjoy, and thanks for reading!